Why Law & Order's Gamergate episode pissed me off so much

Last Saturday night I curled up on the couch with my husband and dog, ready to chip away at some of the DVR backlog that inevitably piles up when I’m away on business for a week. I picked Law & Order: SVU, the show that sits half in the “guilty pleasure” and “I still watch this out of some sort of weird ass loyalty” categories for me.

When I saw it was “Intimidation Game”, aka the infamous Gamergate episode, I turned to Mike and said “if we’re going to watch this, I’m going to need a drink.”

This blog isn’t going to be a rundown of everything stupid, inaccurate, or overblown in the episode. Yes, I cringed when Ice-T robotically started talking about Civilization V: Brave New World. Yes, I threw up my hands and exclaimed “how can you only livestream something in 18 countries?!” and snickered at the crazy bizarroland of a video game launch the show created in order to have a plausible reason for their main victim to get kidnapped. All of that was stupid. But if you have seen as much SVU as I have (or even a couple episodes, really, because this happens all the time) you’ll know that their formula requires an over-the-top situation, they don’t love in-depth research, and even if they did perfectly research their topics, they still need to make it palatable and understandable for their audience and their genre. It’s not perfect. At least in the case of this episode, they tried to use gamer lingo and Ice-T sometimes pulled off his translation efforts as he explained to his colleagues what everything meant (although I posit that FAL is not something anyone ever says, although I’m totally going to try and make it a thing. It means “failure at life” by the way. Seriously.)

There are two things I’m pissed off about.

It’s Extra Life time! And that means… Elizabeth is live streaming herself playing games in order to raise money for the Oakland Children’s Hospital!

The past two years I’ve streamed for 24 hours straight (oh dear god, never do this) while hosting a show on behalf of my previous (and amazing) company Trion Worlds. It was awesome and actually last year I was the 58th top ranked fundraiser out of 43,416 people (not humble brag right there – but it was a lot of work!)

This year, since I don’t run a community team at a gaming company, my husband and I are doing Extra Life on our own (in conjunction with Thursday Knights, the livestreaming tabletop roleplaying group I’m part of – and they are rad, you should check us out!) I’ve set my sights to raise $200 but I want to make you guys a part of my fundraising, so here’s my plan.

If you donate over $5 to me, you can select one of the below games and I’ll send you a gift code. Just leave your game selection in the comments when you donate (also add in your Twitter name so I can DM you the code!) First come, first serve.

Thank you, Jonathan Mann (AKA my post on the "Factual Feminist" video and its unfortunate attempt to weigh in on issues around women and gaming)

Lately, I've been pretty involved in the discussions around women in gaming and what we do about promoting equality, respect, and safety within the gaming community. Truth be told, it's been a difficult journey for me. Since I'm no longer a visible figure in the gaming industry and don't run a communications department where my personal opinions might draw more attention and endanger myself or negatively impact the company and products I work to promote, I've found myself being more engaged in this topic and help further this conversation in a productive way.

Man, it's been fucking exhausting and oftentimes soul crushing.

This week, The Factual Feminist published a video on YouTube asking "Are video games sexist?" Not gonna lie - at the end of the 6 minute video I was actually shaking and wanted to personally say some very unkind things to the woman in the video. Instead, I decided to write up a point-by-point rebuttal to the video (since that seems like a more productive way to further the conversation while also squashing really asinine and bullshit viewpoints.) Those thoughts are below - however, I'm excited to say that Jonathan Mann made an amazing autotune of the video, complete with well-sung points refuting all the claims and assumptions bandied about in the 6-minute monstrosity. Jonathan's video also has an added bonus: I no longer have to post a video I think is so terrible I don't ever want to promote it but I still have a very awesome way to show you that original content (with breaks so you get a breather in between the infuriating blather!)

Check out the video and give my thoughts a read - and please, remember to think critically on these subjects. These issues aren't black and white.

It is getting better

This is a short blog post, but it's an important one.

There's a lot that needs to improve in the world in terms of equality. I spend a lot of time advocating for equality, pointing out problems, and asking difficult and sometimes uncomfortable questions. But the fact of the matter is that things are getting better - not universally, and not as quickly as I think they should. But things have still improved.

Here's an example: Naughty Dog's development team has more females in it than I think I've ever seen before - and apparently only about 2/3rds of them. I worked at devs I thought had a fair number of females, but their ratios paled in comparison to this picture (and while I don't know the jobs of each of them, it sounds like the diversity of skills is kick ass.)

Thanks, Naughty Dog. You are awesome. Keep making awesome games and being pretty goddamned rad.

Last night I agreed with someone on an internet forum that the community I posted in was often misogynistic and within 20 minutes was likened to an African slave trader.

Okay, you’re probably pretty confused right now so here’s the explanation: the guy said it because I worked on Duke Nukem Forever (DNF.)

I’m writing today’s post with a bit of a heavy heart because very few people have said something rude like this to me because of my work on that game: I can count them all on one hand. That being said, these people reside almost exclusively within the internet community that I’ve called home for over a decade and they have made my work on that game a rallying cry in an attempt to discredit me when I talk about misogyny, sexism, or inequality in gaming. I’m not going to lie: it’s unpleasant to be threatened, to know that when you want to post about your experiences as a woman you are going to be insulted, so I’ve decided to take that negativity and turn it into a productive discussion.

Last week, Gabriel Valdez recruited me to guest write a blog about some E3 trailers. It's been a long time since I wrote for a blog that a) wasn't my own or b) wasn't own by someone who directly gave me a paycheck, so I was super excited for the assignment.

The most difficult part of the piece, honestly, was trying to get past my cynicism (too many years peeking behind the E3 curtain.) It was fun, however, to be able to talk about E3 from the perspective of someone who did not attend the con - something I haven't done in years.

Anyway, go check it out at http://basilmarinerchase.wordpress.com/2014/06/19/e3-reactions-elizabeth-tobeys-top-3/

The brilliant addictiveness of combining activity trackers with radio dramas

Guys, I have a confession to make.

I am addicted to activity trackers.

I realized this back in 2010 when I first got Runkeeper. After tracking one measly activity, I knew I had a problem: I FUCKING LOVED making numbers bigger. I needed to. Like little exercise Pokémon, I had to collect them all. Leave it to me to make a competition against myself – but thank you Runkeeper for fueling my addiction and making running a lifelong habit.

Fast forward to February, 2012. Six to Start, a genius company, launches Zombies, Run! The company calls it a “smartphone fitness game” – and I guess that's a good and literal way to describe it – but it’s actually a brilliant interactive radio drama where you unlock the story by exercising.

Let’s talk about sexism and misogyny: an opening gambit to actually having a conversation

I’m not really sure how to start this blog post, so I’m just going to dive right in and get into it. Hi. I’m Elizabeth Tobey. I’m a woman, and I want to have a conversation about sexism and misogyny and what we can do to create more equality between men and women.

Before we begin, let’s frame this post a little: this is the beginning of what I’m going to make into an occasional series on my blog, so please take this as a jumping off point in our conversation and please understand I want this to be a conversation (so many blogs are soapboxes, mine included despite my best intentions sometimes) – so share this, leave a comment, ask questions, tell me what you want to talk about next.  I’m not going to decree something. I’m not going to solve a problem or point a finger: in fact, a big part of what I aim to do here is to try and be a place where we can (figuratively) talk with normal voices, listen to each other rather than waiting for our turn to speak, and stop making this issue into a warzone and instead turn what’s (unfortunately) right now a debate into a dialogue.

Samus and her new stripper heels

Last week, the Internet spent some time talking about Samus Aran’s newest outfit in the upcoming Smash Brothers game for the WiiU and 3DS. While some websites (I’m looking at you, Polygon) wrote dull, short blurbs about the character reveals, others noted the obscenely high heels Samus now wore and decided to take umbrage with this new fact of life. And while a lot of these articles kind of sucked and many were published for the revenue the clicks would garner them because this is a sensational topic, I am more ashamed of those who ignored the issue (or didn't even see it as an issue) more than those who used it for clickbait. It’s a sad day when I’m going to link Kotaku as a notable publication to show, quickly and easily, how fucked up it is to put Samus in stripper heels. 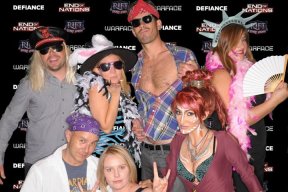