by dahanese at 10:07pm November 3, 2011
Filed under: adventures, boy, friends, work
Last night Greg, Mike, and I traversed into downtown San Francisco one more time to partake in Come Out and Play San Francisco 2011. This time we were in Union Square to play “Jericho – An Urban Spy Game”. We knew this about the game: We would be picking up and carrying “spy documents” or defending and stopping spies carrying said documents, and we should bring a hat and a Nerf gun. As an added bonus, we were told that the person in the best spy outfit would win a “special Nerf gun”. 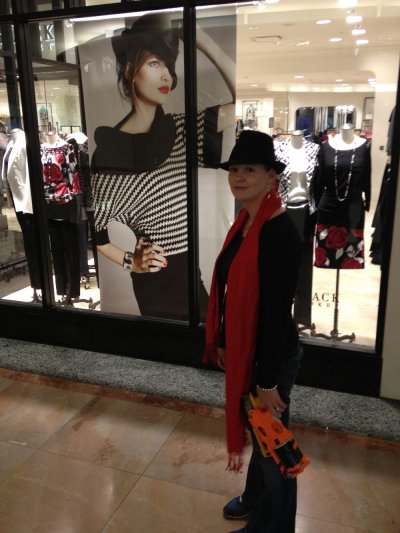 I’m competitive by nature, and really did want a black trenchcoat. However, walking into a store wearing a fedora whilst wielding two Nerf guns was far more embarrassing than I expected it to be.


We were a bit wary of the event after the previous night’s mall debacle, but the lure of Nerf guns is pretty much a Siren song to anyone who likes to play games (come on, you can’t deny it) so at 6:30 PM we arrived (and I was decked out in a double-breasted black trenchcoat, matching fedora, and red scarf tied to look like an ascot).

From the moment we saw the event’s coordinator, dressed in a full tuxedo, the game went from awesome to completely fucking badass.
Read More
Comments 0

by dahanese at 8:52pm October 30, 2011
Filed under: adventures, boy, california, friends
For the past three Halloween weekends, San Francisco has hosted an event called Journey to the End of the Night as part of a larger Come out and Play festival. I learned of Journey from my friend Matt, who told me about it about a year and a half ago after he participated in one of these events in Germany.

If you want to learn more about Journey, go to www.totheendofthenight.com - and to hear about our experiences, keep on reading.

by dahanese at 6:34pm October 12, 2011
Filed under: adventures, boy, friends, gadgetry, gaming, work
So, if you know me, you probably know I really like video games, the Internet, and hanging out with people on the Internet and that I meet in the Internet whilst doing things that relate to video games (I, know, I know, it's shocking that with these hobbies I run community and social for a video game company. Shocking, I tell you.)

Anyway, a long, long time ago I was terrified of public speaking, so I joined Model UN in high school because I believe the best thing to do when you are terrified of something is to force yourself to do it. My first conference, I was timid, so the cond one I said to myself "the worst you can do is fail utterly and everyone will laugh at you. Then you will leave this place and never see them again." (motivational speaker I am not.) that tactic worked for me and I ended up winning a ton of awards and becoming president of the club - so I apply it in how I work when dealing with the public facing portions of my job, which are numerous.

While I might not like the sound of my voice, I do a lot of interviews and these days, at work, we have a robust streaming setup. So when Greg bought Dark Souls and told me it was soul crushingly difficult, I thought that I would buy it too (because I'm a masochist) and cord myself playing it for the benefit of amusing my friends.

Last night I did one better: using http://twitch.tv/dahanese I streamed myself playing the first hour of the game. Between people on Twitter and Shacknews I think I got something like 200 views (I use ustrwam.tv currently for work so I havent poked around with the twitch metrics - I would love to know how many poor souls were concurrently suffering as I played horrifically poorly.) and while streaming myself doing something personal in my home was slightly terrifying to me (not to mention I was purposefully putting myself in a situation where I would look dumb for the amusement of others) I had a ton of fun with the entire ordeal. From setting up the system (thanks Loiosh!) and learning that MacBook Airs are fucking amazing and can run a high quality stream of two cameras over wireless to having my chat room heckle me and steer me at times towards death and success, everything was awesome.

I understand now why Greg likes streaming his live D&D sessions. While he Likes being in the spotlight far more than I do, I'm not without ego, and so even if this is a situation where I am the fool rather than the rockstar, having a crowd to cheer and laugh and enjoy is really welcoming.

I knew when I bought Dark Souls that it wasn't my kind of game. I like beating on things, but I am terrible at learning to be defensive and subtle when slashing away at enemies in video games. That's one reason I love Borderlands, for example: group play and as Brick I could run in and bash people in the face with my fists while my fiancé (playing the sniper) laughed at me through his rifle scope. I also rally don't ke things that are punishingly difficult - I challenge myself enough in life - I like the option to drop a game to easy and cruise through it after a difficult day. Dark Souls has none of this, but because of that, it makes for an awesome game to watch me play, and it also is an awesome game for my to have a group with me while I play so perhaps I can make it to the end.

Okay, maybe making it to the end is overzealous, but I'm looking forward to being back home next Monday so that I can figure out how to make the image quality better and stream again. And not only that, I'm a lady thinking s out buying direct feed inputs to stream games from my desktop or direct from my consoles. I mean, if people will watch me and through the amazing connectedness of a live stream hang out with me, think of how many video games I minght playnthat I've previously set aside. Who knows, may e someday I'll play one I'm actually good at (although I'm sure the ones I am terrible at are far more fun.)

So I'm taking requests on what you guys want to see me play in the future and inviting you to watch me through the next week or so with Dark Souls. I think live streaming is awesome and have thought so since we started doing it at work over a year ago, but I never realized how much I'd enjoy it for my own personal use.

a treatise on the woes of floral centerpieces

by dahanese at 1:12am May 16, 2011
Filed under: boy, random, wedding
first off: i promise, this is nothing like a treatise. well, maybe kind of, sort of. but not really. hopefully, much less pretentious at the very least.

as you may know, i'm getting married next march. i have a semi-modern view of weddings and am not keen on excess, stress, bridezillas, and traditions that are stupid.

among those traditions i deem stupid are floral centerpieces.

What the hell is Jejuning?

by dahanese at 11:17pm November 14, 2010
Filed under: adventures, boy, friends, gaming, work
If you've been following my Twitter account for any length of time, likely you have heard me say at least once that I have been Jejuned. If you are confused, this blog post is for you. It probably won't make you any less confused, but it will at the very least explain what the hell I mean when I turn the word jejune into a verb.

hi to you jimmy eat world!

last night, jimmy eat world played the fillmore, a teeny venue 1 block from where i live. they played the entirety of clarity, as they published the album 10 years ago.

my friend lydia got me a free ticket. i had a ton of work, and almost didn't make the show, but mike got one for a steal on the street, and we went together.

yesterday was a horrific day for me, and i was quite upset and stressed.

but i heard them play all of clarity, live, and i was about 100 feet from them when they did it. 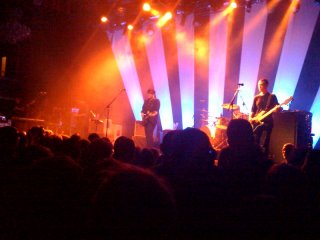 by dahanese at 4:21pm August 3, 2006
Filed under: boy, gadgetry, the shack
i really gotta stop shacking so much. (this, by the way, will never happen.)

there's such a thing called shackhype. it's when enough people rant and rave about the wonders of a game till no one can resist buying it. this happens to me a lot. my nintendo DS (like the best purchase EVER) is complete shack hype. in fact, most of my technology is shackhype. anyway.

right now, there's a game on the horizon called dead rising. basically, you're a journalist and you go to a town for a scoop and find out pretty much everyone's a zombie. you go to the mall to try and find safety, and there are zombies (and some survivors) there. so you have the run of the mall to make weapons and fuck shit up.

i'm terrified of zombies. i suck at first person shooters. and this game is for the xbox 360, which is a several hundred dollar console. the game itself is 60$. i know, if the stars were aligned perfectly and money was no option, eric would play this game while i cowered in fear behind my hands and whimpered like a little girl.

however. i want it. so bad.

so where's the best corner for streetwalkers, because i have to turn tricks and start saving up.
Read More
Comments 1

by dahanese at 5:45pm April 10, 2006
Filed under: boy, family, friends, the shack
so friday, i rode down to soho and met up with david, the guy i used to work with at DS. i'm really glad that after about 2 months, we're still friends. we had lunch, i came back. and maybe it's the nice weather, whatever, standing in the sun waiting to cross the street, i thought, "jesus. if friends could be made into something physical, i would be holding a misshapen circle of glass, hand-blown and cool, and that would represent my friends."

i realize, upon typing that, i sound like a fruitcake. but that's how i describe it. beyond joey, i think i can actually add david to that column. which means he is officially The First Friend I Made In New York.

for the rest, mosey on over to here: http://orbit.vect.org/?nycshack3 (thanks mike!)
my shackmeet saturday night. god bless sarah's soul for coming with me, although she didn't stay the whole time. god bless eric's soul, for coming with me. we played guitar hero, ds, some ddr till a neighbor told us to stop. we drank, ate pizza, talked. i left a bit after 1. and i think, by god, these people... they might be my friends, too.

i don't know how to quantify and qualify a "real friend", as i always seem to choose the wrong ones or somehow wreck that thread. i don't know if it matters if they consider you a "friend". i really don't think so. i don't know if it's one-on-one interaction, or face-to-face interaction, or if it really matters at ALL whether anyone agrees on your friend categories other than yourself. i'm of the latter opinion. since the age of the internets, i've counted my friends as friends, regardless of their form. can't say they've always been great choices, but whatever. live and learn.

so to nyc shackers, and david? i suppose i tip my hat. apparently, i categorize you as a gooberish-feeling glass globe.

which is a compliment.
Read More
Comments 2