Come Out and Play San Francisco: Undercover Capture the Flag

by dahanese at 6:35pm November 2, 2011
Filed under: adventures, california, friends, work
Last night, Greg, Cailin, Mike, and I went to Undercover Capture the Flag at the Westfield Mall in downtown San Francisco. We had really high hopes for this kind of subversive play: the game entailed you hunting down players on an opposing team and tagging them by saying "do you have the time?" No one in the mall was supposed to know you were playing and you were supposed to blend in - all the while looking for flags posted on walls throughout the mall.

So, that's what was supposed to go on, but let me tell you how it actually went down.

We arrived a bit late (around 6:20) and found a man in a Captain's hat who put us on the Red team. He then explained the rules: we were actually undercover - this game was not sanctioned by the mall, so we could be thrown out if we were discovered. No running was allowed, and you had to be a covert as possible. The mall was also divided into two sections (we would only be caught in the Blue section) and the sections were loosely divided by the elevators in the building. When caught, you had to go to a jail and stay there until 6:30, 7, or 7:30 (or until someone on your team made it through and said "we've been looking for you!") 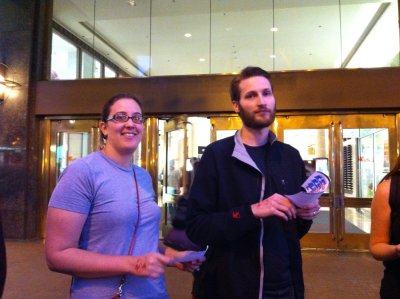 Cailin and Greg, receiving our instructions.


With high hopes, we entered the mall... And immediately I got caught before I realized I had even crossed the boundary. I explained this to the other team, who seemed to think I was cheating, and retreated. We then examined our maps more carefully and realized that they were an abstraction of the size of the mall (and not even the whole mall) and not at all to scale: The Red side was TINY and the Blue side was huge. This meant that our flags were concentrated closely around escalators whereas theirs could be anywhere - even traveling to free someone from jail took eons longer on their side than ours. 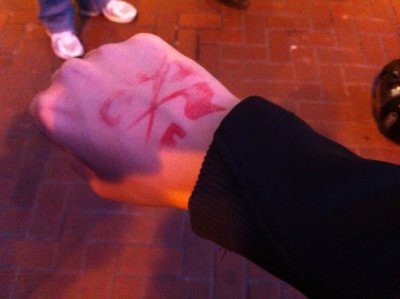 My hand - we all had these stamps to show we were playing.


We also went down to our Base to give our phone numbers to a text message train that was going on - so we could tell each other where enemies and flags were - but we were disbanded before we could give that information because mall security was actively trying to break up the game (I guess the players weren't that covert. Everyone I saw was pretty obvious and super intense.) 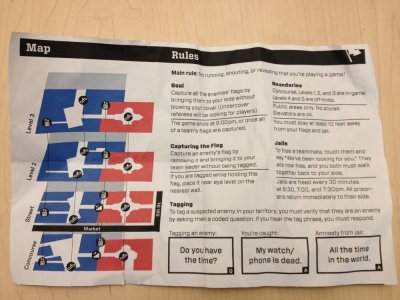 The map - don't be fooled, the blue side is even larger than that in reality.


Not surprisingly, when I traversed just over the line of scrimmage to get a pretzel, I was caught by a guy who grabbed my shoulder (I guess he thought I'd run?) I was peeved, but 5-10 minutes later we'd finally reached the jail... Were I stood for 20 minutes, texting with my other three friends, thinking how extremely lame it was that I was missing a good fourth of the entire game in jail.

The highlight of the evening came now: A woman in a baby stroller came up and told everyone very quickly "I've been looking everywhere for you!" I'd still been in jail almost the entire time I could possibly be in jail, but seeing her sneak up with a BABY was pretty epic.

We scurried back to our zone and I said I didn't want to leave there ever again. Getting caught was too detrimental to any hope of having fun (Greg and I firmly agreed that having a jail was a terrible game design - perhaps worse than having the playing field be terribly unbalanced). 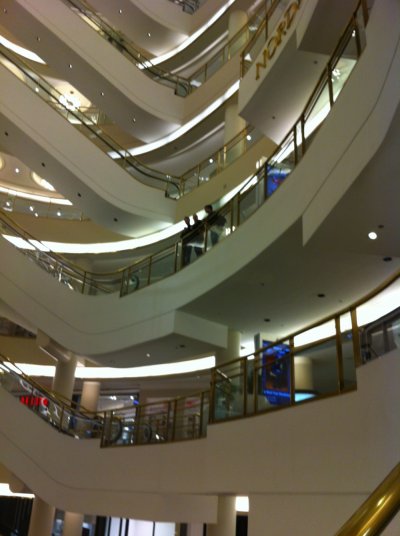 Cailin, coming to join us so I can show her that awesome jacket I found.


Cailin decided to chill at a cafe as she didn't want to clash with the mall security (huge flaw in the game - some players don't like pissing off authority, even if we are playing subversive games) and after I realized that I was trapped in a tiny spiral of space, I got distracted and found a jacket I liked (it had shiny buttons!) After that five minute diversion, we headed out (it was about 7:33 now) and began searching for our own flags to guard... and were told that Blue had won the game.

By the time we got back to our Base, no one was there.

Luckily, we ended the night by eating dinner at Dosa, which is the best Indian food ever, so at least there's that.

In short: I hate it that this entry is a negative one, but the game fell short. The gamemasters didn't properly spec out the space and ensure proper game balance and level design, they didn't properly weigh the pros and cons of guarding and going on the offensive, and the players were too overt to skirt mall security. All-in-all, we spent time in jail, ate pretzels, and wandered around asking other players if flags really were in the mall, or if security had taken them all down.

There's good news to end this entry, though - never fear! Tonight we play Jericho: An Urban Spy Game. We have to bring hats and Nerf guns. How can any game played with a Nerf gun be bad?!

1 Comment on "Come Out and Play San Francisco: Undercover Capture the Flag"